Kraków, also spelled Cracow, city and capital of Małopolskie województwo (province), southern Poland, lying on both sides of the upper Vistula River. One of the largest cities in Poland, it is known primarily for its grand historic architecture and cultural leadership; UNESCO designated its old town area a World Heritage site in 1978. Its marketplace, Rynek Główny (Main Square), has existed since the 13th century, and a modern landscaped area is laid out on the site of past fortifications. 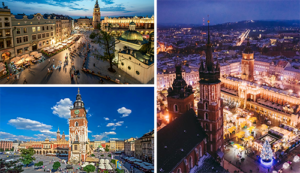 How to get there

Getting to Krakow, Poland

Reaching Kraków is relatively straightforward and the city is well served by air, rail, and road, both domestically and from other european destinations. But it’s worth bearing a few things in mind, especially if you’re flying with certain budget airlines or coming in by car.

Train
Kraków Główny, the city’s main station, is served by trains from most Polish destinations, as well as from the capital cities of neighbouring countries. There are direct trains from Berlin, Vienna, Prague, Budapest, Bratislava, and Kiev. But you’ll have to change if you’re travelling in from Minsk or Vilnius. Many of the longer journeys are overnight, with sleeping cars an additional option. The airport train from John Paul II International also arrives here. The station has an excellent location, a mere 5-minute walk from the Old Town, making it a fantastic point of arrival. The station is fairly new and, as it is built into a large shopping mall, has pretty much everything a traveller could need.

Bus
If you’re travelling by coach, you’ll almost certainly arrive at Kraków’s Dworzec Autobusowy, the bus terminal built into the main train station. Though a little seedy, the location is conveniently close to the Old Town and a superb place to arrive in the city.

Do you need support?

If you need help with or if you have any questions, please contact Francesco Longo, f.longo@unical.it, and Marina Massei, massei@itim.unige.it.